Those two sentences show a great deal about the world view of aging. If you’re of sufficiently high status, age becomes irrelevant. I’ve been saying this for awhile. Good things in age come from continuity. You can’t begin a new career, but some careers allow you to continue and even embellish on what you’ve done before. You can cement your status. You can’t build it from scratch. END_OF_DOCUMENT_TOKEN_TO_BE_REPLACED 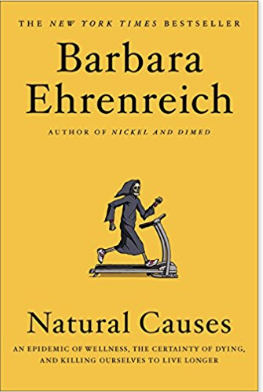 I wanted to like this book because I share some of Barbara’s attitudes toward health. Like her, I exercise for fun and even more for vanity. I eat what I want and forego medical screenings. Unfortunately, as other reviewers noted, the book turns into a rant that gets a little annoying. Overall the book suffers — on a larger scale — from the same flaw that undermined Bait and Switch. Ehrenreich takes a particular example from her own experience, generalizes, and editorializes. END_OF_DOCUMENT_TOKEN_TO_BE_REPLACED

This blog is about outrage against stereotypes of age, sex and marital status. I also rant about the medical profession and talk about comedy. When you put these together, being old, single and female completes the perfect trifecta, making you a target for society in general and the medical profession in particular.

I’m not amused when a fifty-something author jokes about not remembering her ATM pin number. I know my pin number. I also know my library card number and my credit card numbers. It makes life easier.

I’m even less amused when someone asks me if I use email. I tell them I build websites.

It’s time to stop accepting a second place, subservient role just because you’ve had a birthday. Instead of quiet acceptance, let’s belt out the old George Jones anthem, “I don’t need no rocking chair.” Let’s recite Dylan Thomas: “Do not go gently into that good night. Old age should rave and burn at close of day …”

This is a blog for raving, for gym memberships instead of rocking chairs, and replacing calm acceptance with a few well-chosen four-letter words. I want to be blown out like a candle, while I’m still burning.

Why sneakers? I’ve worn nothing but sneakers for the last fifteen years (with a few brief exceptions, like the time my friend got married and announced, “No sneakers at my wedding!”). Sneakers are associated with having fun, relaxing and being yourself. Stilettos have become associated with female success; just google “success in stilettos.”

The idea is that people, especially women, should accept pain and discomfort in exchange for beauty. In the 21st century, when women are landing fighter planes on Navy carrier decks, this idea seems a little dated, to say the least.

Associating high-heeled shoes with success incidentally associates beauty with success, and for most people, beauty equals youth. In her book Never Say Die, Susan Jacoby has pointed out that women in particular are judged by their faces, even if their bodies are toned and firm.

Compliments are conditioned by “for your age,” as in, “It’s impressive to see a woman your age who is bungee jumping… or running a marathon… or doing stand-up comedy … or simply surviving without medications].”

Aren’t those accomplishments impressive at any age?

I may have to go down for the count but I don’t have to go there quietly. If you relate, this blog is for you. 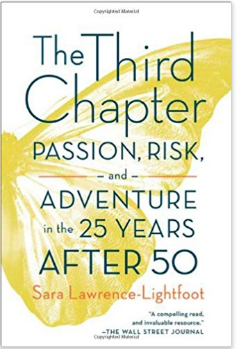 As I’ve noted in reviewing other books, I often think it’s impossible to write a really helpful book about this stage of life because (a) there just aren’t a lot of choices for everyone and (b) there’s such a variety of people, health levels, skills, aptitudes, background and more. Sara Lawrence-Lightfoot deals with (b) by focusing on a small slice of the population: educated, healthy people without financial worries. Within that group, she finds common patterns: a yearning for something that can’t always be named, a resistance to change (possibly because successful people tend to resist changing a cherished identity) and finally a learning that differs from previous classroom experiences. END_OF_DOCUMENT_TOKEN_TO_BE_REPLACED

So now the role of an “older” woman is to be an unpaid relationship coach to a clueless guy. And of course she’s filled with advice on how to deal with women in their twenties, since it’s been awhile and dating norms have, um, changed just a little. END_OF_DOCUMENT_TOKEN_TO_BE_REPLACED

“You’re Sick. Whose Fault Is That?” Response to NY Times Article

This article by Dhruv Khullar was published in the NYTimes.

The author writes: “Behavior contributes to nearly half of cancer deaths in the United States, and up to 40 percent of all deaths.”

The first citation refers to a popular news magazine with no links to the actual study. The second refers to a NEJM article that draws the 40% statistic from yet another article, this one appearing to be a summary in JAMA, associating numbers of deaths with specific behaviors, with virtually no info dabout how that number was calculated. END_OF_DOCUMENT_TOKEN_TO_BE_REPLACED

Simplistic article on suicide in the elderly from Milesetones

Milestones is a tabloid type newspaper published by the Philadelphia Corporation for Aging and distributed free in Philadelphia and downloadable online. It’s the usual party line pep talk stuff.

Their November 2017 issue included an article about suicide. Here’s how I responded.

I was appalled by your article on suicide among the elderly. Milestones reaches a large, diverse audience with a tabloid type newspaper. You have a rare opportunity to share accurate information and raise concerns. Instead, you present a simplistic view of a complex subject, in a way that could actually harm the very people you are targeting for help. END_OF_DOCUMENT_TOKEN_TO_BE_REPLACED

END_OF_DOCUMENT_TOKEN_TO_BE_REPLACED

Is this ad offensive or what…

Oh no … we are “Elder Orphans”

Here’s what I sent to the author of Milestones, a tabloid for “seniors.”

The story on “elder orphans” raised several questions for me.

The term “elder orphans” is deeply offensive to many people who are aging without family. An orphan is a child without parents. We’re talking about adults without children. The term is infantilizing. END_OF_DOCUMENT_TOKEN_TO_BE_REPLACED